Immediately following the olive oil tasting, Violetta provided tapas to supplement the wine tasting – mild goat cheese slices, serrano ham thinly sliced, olives, and bread chunks. Ingrid chose to not participate and went out into Niguelas seeking a cup of hot tea. What is wrong with that girl???

Huelva, a region known for its strawberries, is making a comeback, producing lighter table wines (Condado de Huelva Blanco Joven). This a crisp delicious white wine. I don’t often drink white wine, but this one was refreshing.

Rioja, a classic region of northern Spain, produces some of the best wines in the world, some ready to drink young, others spending years in barrel and bottle before hitting the shelves. I have been drinking at least 1 glass of red Rioja every day since we arrived. It is used for the table wines and house wines in the restaurants and can be bought in the grocery stores at more than a reasonable price. Just order “una copa Tinto”, and you will soon have a generous glass of red wine in front of you!

Sherry or jerez is the Spanish wine from the southern region of Cádiz, and is enjoyed all over Andalu 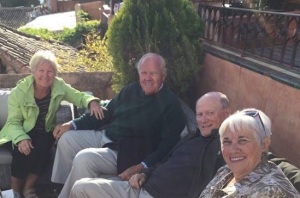 cia. I was eager to finally sample sherry from Jerez as we didn’t make the trip to Jerez that we had wanted to do. This sherry is so sweet, being made from dried grapes (raisins) that it is frequently served over ice cream. It tasted delicious. Norm and I later ordered it over ice cream and loved it. There is a gelado flavor with raisins called “malaga”. I intend to try it soon, as I think it may derive from the raisin sherry over ice cream idea.

I did not get one single picture! Too busy drinking wine… I wonder? So I’ll just throw in this one from Granada. It shows the grand four enjoying the sunset view of the Alhambra from atop San Nicolas ridge. There’s a glass of wine nearby, I assure you.