We said a quick and early good-bye to Torremolinos, grabbing a cab for the Malaga Maria Zumbrano Tren Estacion at 7:30AM. 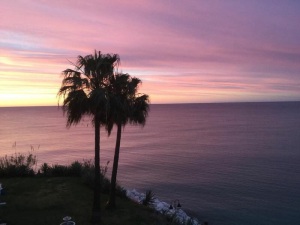 We ate a quick breakfast at our usual spot, the Orient Express Cafe in the station, and then boarded our Renfe Avance train for Cordova, on our way to Valencia which will be our launching site until May 15. The public transportation here in Spain has been clean, prompt and efficient. When we have only ourselves to transport we use the metro or the bus service, but today we were loaded down with all of our luggage and purchases. In order avoid the mule-packing system of our younger years, we enjoy the taxi services, which have also been easy an efficient to use. We arrived in Cordoba for our one night stay at the EXE Conquistador Hotel and were thrilled to find it directly across the street from the Mesquita, the Mosque-cathedral of Córdoba, the focus of our stay here. We will tour it tomorrow as it is open while most other sites will be closed on Monday.

After a quick Spanish pizza for an early lunch, Norm and I grabbed a horse and carriage ride to get an overview of the main attractions. Luckily, the ride ended very near one of the sites we wanted to see up close, the Roman Bridge.

Before we crossed it, we enjoyed the views of the Guadalquivir River which also flows through Sevilla and Granada. An ancient waterwheel and remains of a mill, Aldolafia y Molinos, can be seen from the upper walkway. A nature park and walkway has been developed along the river.

Across from the bridge is the Alcazar and the Triunfo de San Rafael Tower. The Alcázar de los Reyes Cristianos (Spanish for “Alcázar of the Christian Monarchs”), is also known as the Alcázar of Córdoba. It is a medieval palace, a long time residence of Ferdinan and Isabella, supporters of Columbus.

Nearby, is a sculpture garden. “Sanafor de Letras” is a favorite.

While I rested at the hotel, Norm took an extended walk on the edge of the Old Town to view the Roman Temple. We viewed the impressive pillars on our carriage ride, and he wanted to get up close and personal with his camera in hand.

While he was on his walk, I enjoyed a coffee on the beautiful patio in our hotel. Cordova is renown for its patios and has a festival approaching in May which will showcase dozens of them.

As Norm was exploring, he came across a restaurant that we had been looking for, so he made reservations for us. It has a terrace eating area, so at dusk we made our way to the Pairi Daeza, it was a mild evening so we could watch the sunset over the Mezquita. Life is good!

4 thoughts on “Cordova- a one night stop”