Sagrada Familia Basilica was architecturally designed and engineered by Antoni Gaudi, a devout Catholic who, never marrying, devoted his last decades to building this church. Started in 1882, the construction continues with the use of Gaudi’s plans. Gaudi was struck by a streetcar in 1926, while walking home from mass, wearing his shabby work clothes. He was taken, unidentified to the hospital as a poor man, where he remained unconscious until the following morning when he awoke and asked for last rites. The priest who came recognized him, but it was too late to help. The goal is to complete Sagrada Familia, never using government funds, by 2026, to honor what would have been the 100th anniversary of Gaudi’s death.

This is the portion most completed while Gaudi lived, The Nativity entrance. There will be 3 facades in all… The Passion  facade detailing the crucifixion, directly opposite this one is harsh, plain, and depicts the sins of man. The Glory facade will be the main entrance. There will be 18 spires, each level more elevated – the 12 Disciples, the Four Apostles, The Virgin Mary and Jesus Christ, who will be able to be seen by sailors at sea!

This is considered a combination of Gothic and Art Nouveau styles….hmmm? It’s Great!

Always honoring nature, the white peaks and lower peaks have baskets of fruit at the top. There is so much to look at and see, I’m sure I could return many times and still find new details.

Below The Nativity Facade faces the north. See what portions of the nativity you can see. It is not all shown.

The Crucifix is below. 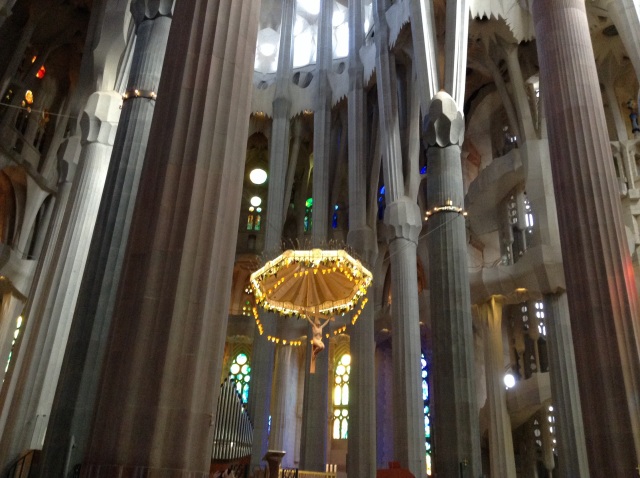 Above, The Crucifix along with some of the organ pipes. There will be eight organs eventually.

Below, looking up through the columns designed to be palm trees with light coming in through small windows to make it appear to be a forest canopy.

Below, an example of the color in the stained glass windows.

Below, The Lord’s Prayer in Latin. These two panels will be the front doors of the Glory Facade. For some reason not understandable to me, people lined up here to have friends take pictures of them standing in front of these doors. I waited a long time to get an instant shot between groups of people. 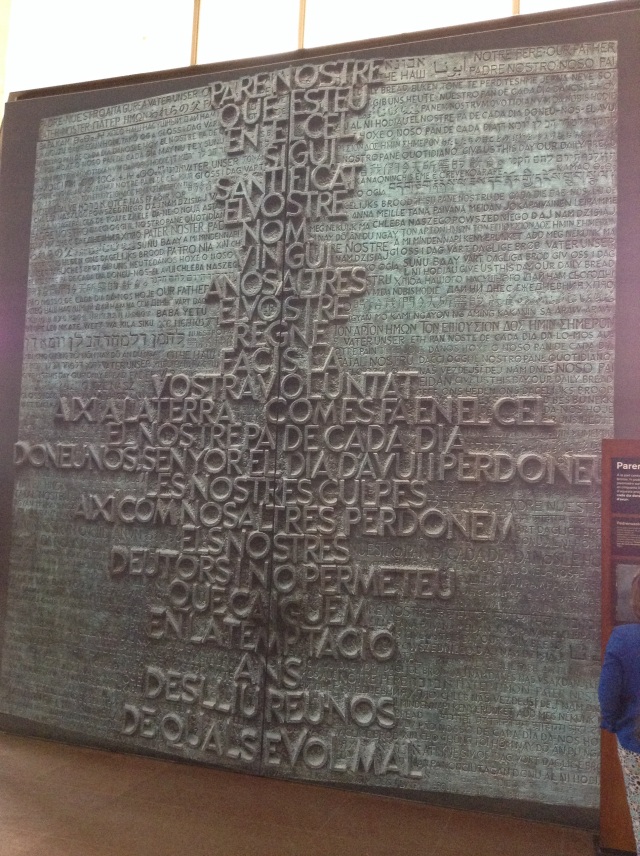 We took so many photos and spent a lot of time here as the detail is phenomenal, but this gives an overview.

We taxied to El Born, near the Picasso Museum, and spent some time wandering the area. Then returned to the roof top deck, and later the lounge, at the hotel. We grabbed a quick bite at an excellent Italian Café, Reñé Café-Bar and Restaurant, an old confectionary factory started by the Reñé family in 1892 which later, in 1910, became a famous bakery in Barcelona. I found out I like carpaccio – shaved beef with a tiny amount of shaved of onion and garlic. Then we headed home on the Renfe AVE train, to the apartment in Valencia, arriving before dark. Barcelona is a wonderful city…. Put it on your bucket list!