Day 6-Sep 28 (Wednesday)
Today was a day to segue to the river cruise. We boarded the bus at 8am and drove 4 hours through the Czech Republic to Bratislova, Slovenia. We ate a delicious lunch provided by Grand Circle in a restaurant usually used by the politically elite, and then took a walking tour of Bratislova which was behind the Iron Curtain until the fall of the Berlin Wall. On our drive, Mihai told us what life was like living under communist rule as a child. It was a fascinating account of his family’s struggle and of how people in general coped to survive. As we took our walking tour Mihai pointed out several lighthearted sculptures. 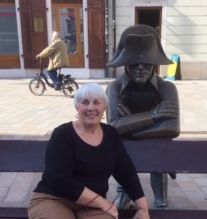 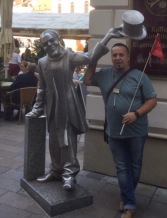 Norm with a pig dressed as a knight; Norm with his namesake- Ritter means knight in German; Mary with a French soldier; our guide Mihai with the “charming Nazi”, based  on a real life Nazi whose girlfried was “disappeared” by the Nazis. From then on he walked the streets dress in a tail and top hat, a bitter and disillusioned Nazi.

And we learned what life was like when a King or Queen ruled. Queen Maria Teresa began her rule after her father died with no sons to inherit the crown. Sensing the unhappiness of her subjects, she married a royal prince from a neighboring province, making him King. She then had 16 children and married many of them off to neighboring royalty. Eventually, she ruled the largest kingdom ever because her children added land to her realm.

In the mid afternoon, we arrived in Vienna and boarded the River Adagio Cruise Liner. After getting settled for an hour, we met the crew at a meet and greet in the lounge and were given our marching orders for behavior aboard ship. We had a delicious dinner, getting to know more people. Our table mates tonight were from San Diego and Montana.

Tomorrow we tour Vienna and start our river cruise after dinner in the evening.