As we float down the Danube River, we are straddling the border between Austria and Germany. There are rolling tree-covered hills with picturesque villages on either side. We won’t technically be in Germany until we dock in Passau and register our passports. We have left our passports with the ship’s pursor so all of the details will be handled for us.

Passau is a town in Lower Bavaria, Germany. It is also known as the Dreiflüssestadt or “City of Three Rivers,” because the Danube is joined at Passau by the Inn River from the south and the Ilz River from the north. l thought it would be interesting to cross through this confluence, but we are berthed at the tip of a peninsula where the three rivers meet, and it is smooth and quiet.

Some folks bring their bikes and go on a bicycling cruise. Different ship from ours. I like this sign because it makes sense… Cruise going 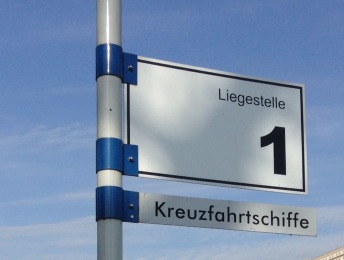 Some folk bring their bikes! I translate this sign as cruise going shelf #1.  It marks where the cruise ships dock on the pier.

The guide in Vienna told us Cici was beautiful like Romi Schnieder, who played her in a movie. Franz Joseph chose to marry her over her sister and against his mother’s wishes because she was so beautiful. She was sad like Princess Diana becase Empress Maria Terese was not a good mother-in-law. The empress insisted on raising Cici’s children and isolated her until she produced a male heir. Her third child was a son, but he died tragically as a young man. She rode horseback like Don Giovanni – she was a bit of a tomboy. She was assassinated like JFK at the age of 72(?) by an anarchist. He stabbed her with a long sword while she was out walking. The tightness of her corset stemmed the bleeding, but when they removed it, she died. What a story! There is a three part movie based on her life that I hope to watch.

After the concert, we found the highly recommended Simon’s Cafe where we had a small lunch and bought some chocolate to enjoy aboard ship… just in case we ever get hungry. 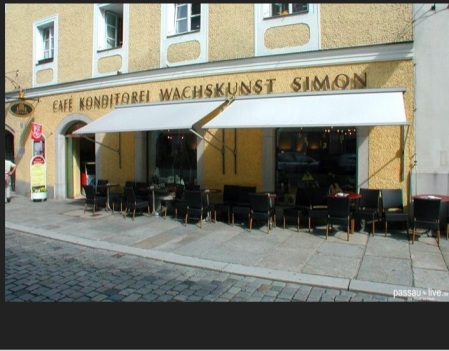 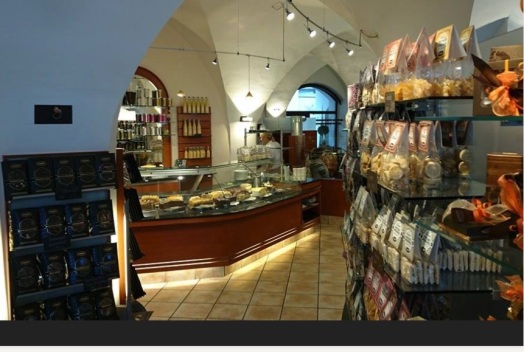 After strolling about the city for a short time, we returned to the ship to hear a presentation from a Sudeten German woman. It was fascinating. Sudeten Germans live in the Sudetan Mountain area bordering Germany/Czech Republic and are the German people  who were forced into The Czech Republic when the borders were realigned by treaties following WWI. They gradually developed new lives and then Hitler began to rise. During  WWII, they were displaced over and over. While we all know of the displacement and horrible treatment of the Jewish people, few of us know about the difficulties faced by these formerly Bohemian Germans.