We were docked in Würzburg but had decided to take the daylong tour. Those who stayed behind had a tour of Würzburg.

Off on the bus again, this time to Rothenburg ob der Tauber by 9am! This is the most Medieval City we will visit, and it turns out to be a favorite. As we rode through the beautiful countryside, we marveled at the vineyards planted vertically down the steep hillside. The guide explained that this takes advantage of the sunshine which the grapes need in order to develop sugar. If they planted them in horizontal rows, the upper row would cast shade on the lower row, causing loss of sugar development.

We enjoyed seeing the fields that seemed so midwestern. Here the farm families  live in small villages with their fields surrounding them. Wind power is everywhere. These photos were taken from a bus speeding down the autobahn, so you will see some reflections. We enjoyed an included lunch in a local restaurant. 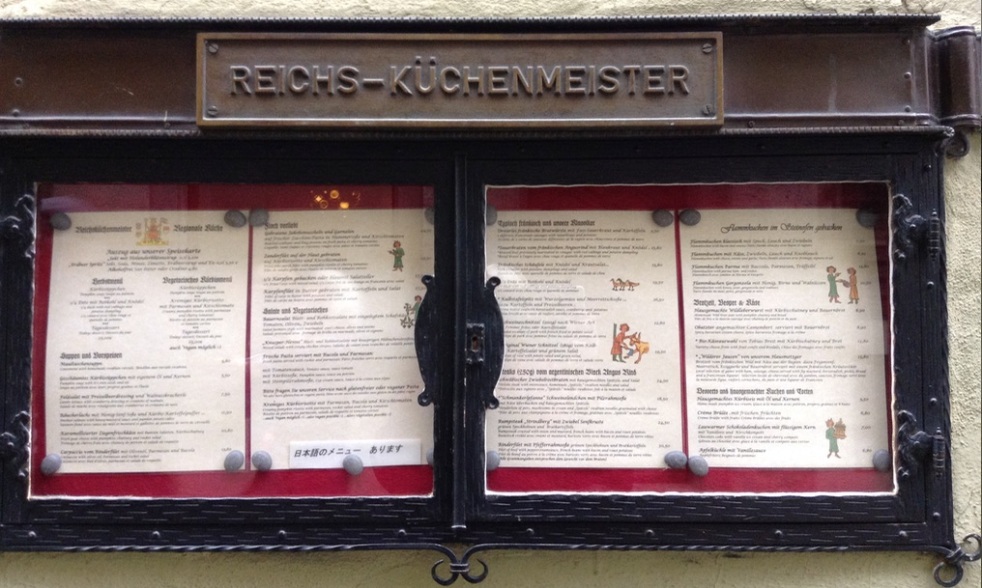 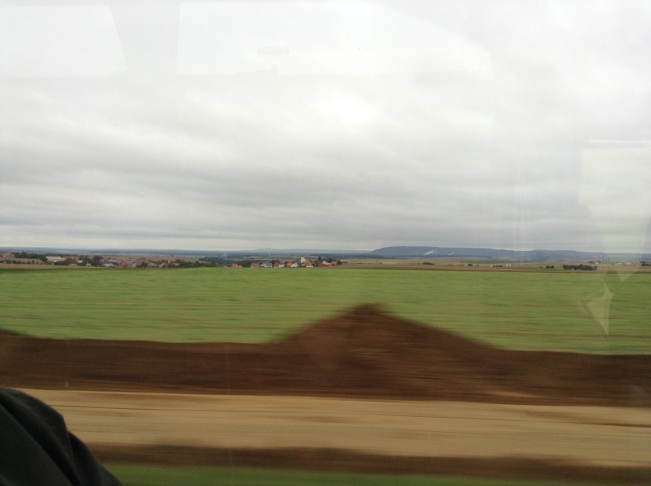 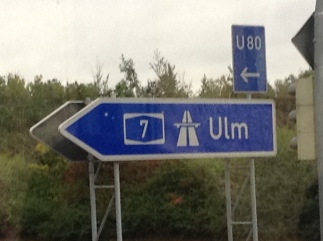 Next came a walking tour and some time on our own to see the beautiful old structures, including St. Jakob’s Lutheran Church. We wandered off on our own to try to walk the old wall high above the city. We found it, but got a bit lost while on our walk. Eventually, we climbed down and hurried to the bus with only two minutes to spare. 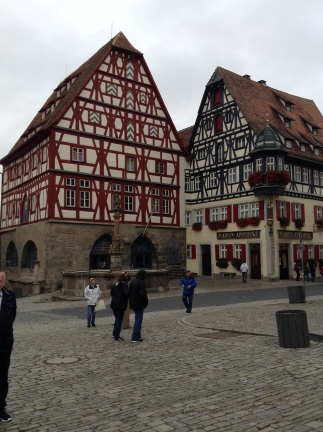 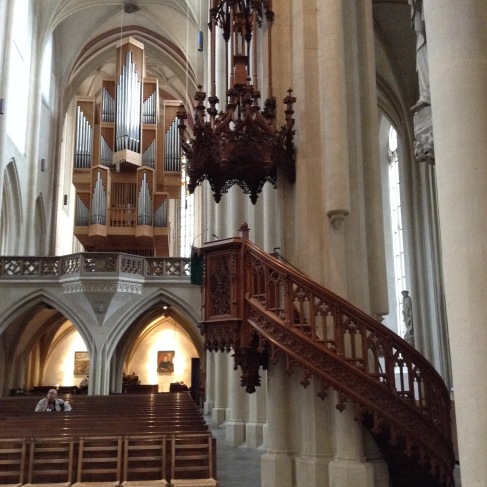 We enjoyed visiting the shops, including many Christmas shops. Käthie Wohlfahrt’s is the name of a famous shop that has a year round Christmas display. The shop is a chain with other shops around Germany. 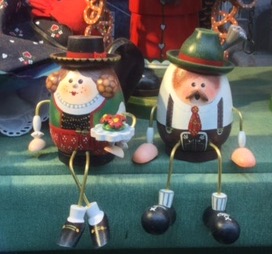 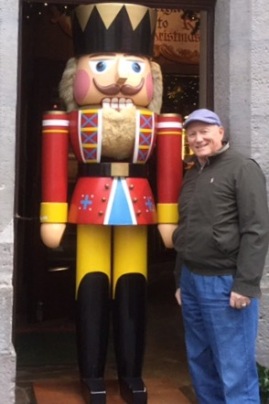 Our guide explained several expressions to entertain us on the way home.
*In ancient days, people would seem to die, but were really in a coma, usually from lead poisoning because they used lead in their plates and cups. For that reason, a bell was tied to the deceased’s big toe, with the bell being above ground. If the person awoke after burial, they could simply wiggle their toe and ring the bell…thus the saying “Saved by the bell.”

*Since the seemingly dead people sometimes awakened after burial, there was always someone who would sit in the graveyard through the night. Thus the expression- “graveyard shift”.

*Similarly, someone would sit with the dead body prior to burial throughout the night. Thus the term “wake”.

*Homes usually had thatched roofs which would hold insects and mice. This attracted cats, which in turn attracted dogs. If there were an especially hard rainfall, the thatch became slippery…. Soon, it was “raining cats and dogs.”

*To keep the dirt floors dry, people would lay down layers of thatch. It difficult to keep the thatch from being tracked out of the house, so they would fasten a board across doorway. Thus “threshold”.

*  Nuernberg Bridal Cup- a father of the bride once told a suitor that if the suitor could drink out of a double cupped wine glass at the same time as the daughter, he would give her hand in marriage to him. The suitor designed this double cupped wine beaker. The skirt is one cup and the bride holds the other cup above her head. The one held above the head is hinged so both cups can be sipped from at the same time! 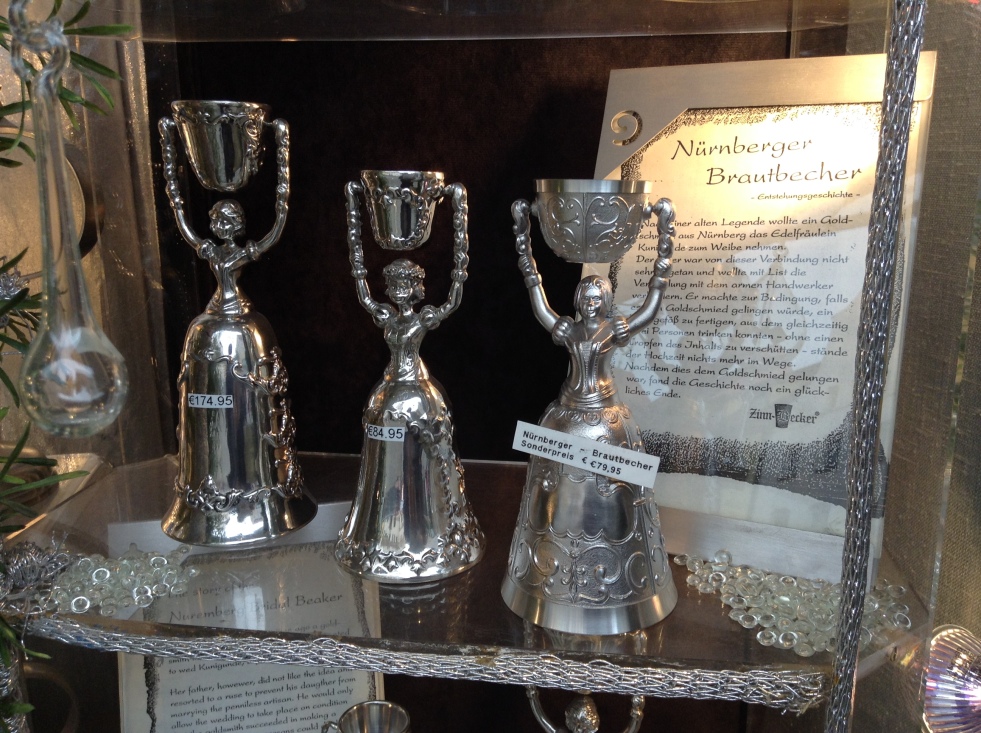 After we returned and ate another delicious dinner, we were entertained by a group of local entertainers in authentic costumes. Some of the costumes were over 150 years old.