Offenbach is the center for the world bank, and is located near Frankfort. We are headed to Heidelberg on the autobahn in a bus as the river there cannot handle a boat the size of the Adagio. While we are in Heidelberg, the ship will reposition to Rüdesheim on the Rhine. There is a governor on the bus limiting us to 100 km/ hour. Porsches and Ferraris are passing us like we are standing still because there is no speed limit on the autobahn.

(Be sure to click on the picture for a larger version, sometimes with commentary.) 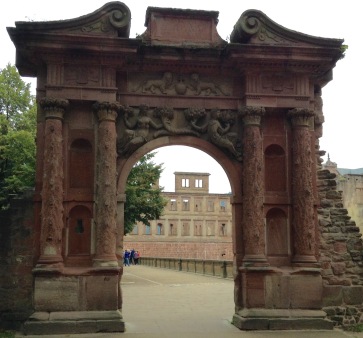 This is the gate into the grounds of Heidelberg Castle.

The Wittelsbach Family joined with the Palatine family to take over each others fortunes if one or the other families died out. Both were strictly Catholic. Fredrick , a WIttelsbach, switched to Lutheran, which was heresy. He is the one who built Heidelberg Castle, a red sandstone structure. Once he died, they switched back to being Catholic. 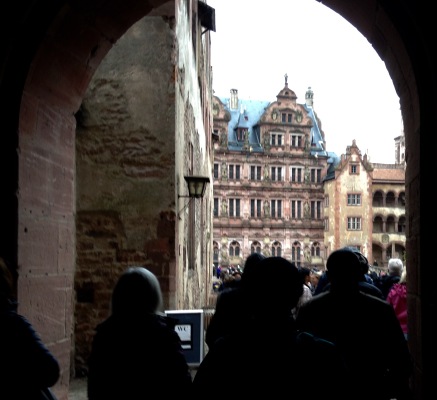 He even became Holy Roman Emperor, but was killed by the Swedes before he could be crowned. He was married to a beautiful Lutheran princess, Elizabeth Stuart, a family which would take over the throne of England. Frederick V was the last one to inhabit the castle in Heidelberg. France destroyed the German castles along the Rhine, but left the Heidelberg castle, as it was already somewhat in ruin. 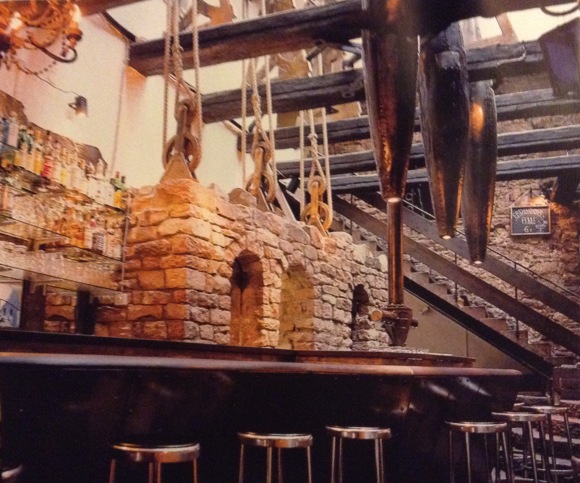 After some free time to explore the castle, we met up with the whole group for a wonderful lunch at Palmbraeu Gasse. In German, gasse means alley (strasse means street). The restaurant was located in historic ruins which had been restored for use, and an alley redesigned to add space to the restaurant.

Taxes- Our guide explains- If you earn 17,000€ and below, you pay no taxes, but can still get full government help as needed-food stamps, help with housing, education, college. Above 17,000€ , you pay up to 46% in taxes, and have a 19% sales tax too. You must prove you have been looking for work in order to get welfare; must go to interviews, get stamps of proof. It is harder than working a job. There are some jobs like harvesting which are called 1€ per hour job, no application or interview. You must take this type of job if it is offered, or you will not get welfare money. The Germans feel if their people are fed and educated, they can prosper more easily, and they have found this to be true. Likewise, they expect the government to handle the refugee expense since they already pay so much to the government.

We always notice all of the bicycles piled/parked in lots around the cities, and it isn’t hard to get in their way or to get knocked down by a bicycle if you do not stay alert.  While walking around Wertheim yesterday, we noticed this coin operated machine for buying inner tubes for your bicycle…. A first for all in our group…