On this day, we disembark the River Adagio and start our bus ride to Bruges, Belgium. Our Program Director, Marloes, points out some features of Amsterdam as we pull away from the city on the Ring highway which encircles the city. The Netherlands has 12 provinces with Amsterdam being the capitol of North Holland, and Rotterdam the capitol of South Holland. An entirely new province created from reclaimed land, Fleevoland, was established in 1985.

Yesterday, on our cruise of the canals, we saw many drawbridges. Drawbridges, of course, were invented by the Dutch with their many areas of reclaimed land separated by small ditches of water. There are 92000 dikes plus Delta Works throughout the country. Delta Works  will hold back the ocean with the touch of a button in the case of an emergency, or to stave off the effects of climate change. It sounds quite complex, and I intend to read more about it.

(Be sure to click on the picture to see a larger version, sometimes with commentary.)

Marloes, a citizen of The Netherlands, pointed out the multitude of windows, mostly free of shades or curtains. Aside from the people not feeling the need for privacy, the government used to tax, not by the size of the footprint of a building, but by how many windows it had. Since that ended, the citizenry has enjoyed having the sunlight pour in from all directions!

If you earn less than 24,000€ annually, you qualify for government housing. Because the government provides newer housing and maintains its quality, this is some of the best housing available, although it is a small space. It is also rent controlled, so families try to keep it from one generation to another, although this is illegal.

As we hit the outskirts of Amsterdam, I snapped a couple of photos of more recently constructed buildings. We were near the university Marloes attended, and when asked, she explained that sports activities are never associated with educational institutions here. Thus these is no such thing as a cheerleader. Sports is its own entity and is operated by neighborhood organizations. 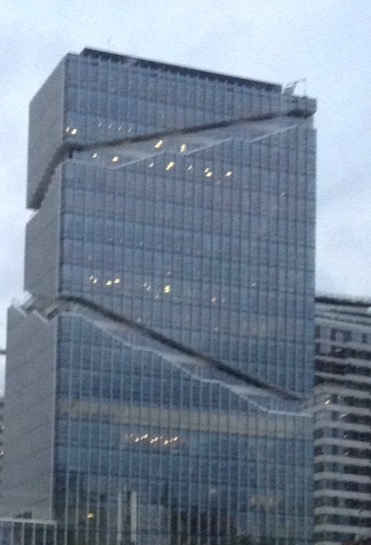 After about an hour’s drive we arrive in Delft, well known for its blue and white dishes with the windmills on them. We visited De Candelaer, a small authentic Delft shop. In order to authentic they must make every stitch of the pottery from the clay to the artistic paints and the artist’s renditions of the patterns.

Greenware fired at 1400 degrees and still hot to the touch.

Designs are painted on the fired bisque ware and then fired again. The entire molding, cleaning, firing bisque, painting designs, and firing again is done in this shop.

The sales area is adjacent to the creative process in quite a small space, actually. It carries the legal mark for Delft ware. Items made in China or other locations are not truly Delft ware.

We also saw houses which backed up to a canal, gorgeous flowers in a shop, and the beautiful, quaint shops sharing the downtown square with two huge cathedrals, an old one and a new one from the 1700s. I bought a chunk of smoked gouda in a shop that sold only Dutch gouda in a multitude of flavors.

We had a local guide and walked some more. It’s another lovely town with structures from the Middle Ages and older… Houses and Cathedrals, of course. We did enjoy Delft for its Henri Willig Gouda Cheese Shop,  and De Candelaer Delft Pottery Shop, spending some Euro in both places.

Then we rode for an hour and stopped at Ghent for another guided walking tour. Ghent was a huge contrast to Delft with multiple huge cathedrals and much larger squares and structure in general.

This structure exhibits the stepped gable roof line and the decorative brick exterior.

We had a local guide who did a marvelous job of exposing us to the high points. It looks to me like Ghent is worth two to three days for a quality visit. I noted only that Ghent is known for its stepped gable roof lines, cheaper to build than a curved roof line, but still adding stature, even though there frequently is no actual living space behind the gable. We feel like we are viewing a movie set at times.

Afew random facts: ***Ganda hams – ganda was the name for Gent in old times and one of their well-known products is ham. ***Ghent folks are called strong heads. Charles V tried to hang many people who didn’t pay bills. There were too many to hang them all, so instead, he humiliated them by making them walk with nooses stringing them together, in white costumes, barefoot in single file. ***Trappist beer is still made by the monks – Spenser Beer in USA. ***Wool and cotton industry during Napolean’s time.

Finally, after another hour of riding, we arrived in Brugge, a very tired group of 13. A good night’s sleep in an old monastery, now the Brugge NC Hotel will make a difference.

One thought on “Day 20-Oct 12-Delft,The Netherlands and Ghent, Belgium”