Posted on December 3, 2017 by muniqueblog

It was an early morning for me as we had a Call Time of 8:15AM. I walked to Park Central Hotel for coffee and an egg sandwich, and then walked to Carnegie Hall Stage Door.

Dress rehearsal would be held on stage from 8:45-11:30. We were led through the back halls of Carnegie Hall to our assigned Orchestra Room to wait for our call. I took advantage to snap a couple of shots of photos on the wall as I waited. Back stage is a maze of hallways and orchestra rooms. Because I was seated, I also had access to an elevator and didn’t have to climb the six flights of stairs up to the orchestra room and then back down and around to the stage.

After our rehearsal on stage, we were led to tiered box seats on each side of the audience hall. We would sit in the box seats, high up on both sides of the hall while Choir #2 presented their parts. After rehearsing the last of our part with Choir #2 on the stage we were dismissed until 1:15PM. The stage manager allowed me to snap one photo of Choir #2 and the orchestra as they rehearsed on the stage. The red box seats on the left are where we would be seated to sing the Hallelujah Chorus. There were box seats on both sides of the hall.

I took time to take some photos outside of Carnegie Hall before finding a place to grab a snack. I did not eat at the Russian Tea Room, however.

I crossed the street to Red Eye Grill and had a brunch of avocado toast/poached eggs/tea, changed into my concert apparel in their bathroom, touched up my makeup, went to Park Central Hotel to pass the time. We soon walked to the Stage door and were seated on stage for concert. The concert was sold out and well received. When all 400+ voices join together for the Hallelujah Chorus and Amen, the audience is amazed as they are seated almost in the middle of the two choirs.

A review was soon published so can read all about it. To quote:

“Not only does DCINY have its own capable orchestra for such occasions, but it gathered close to five-hundred singers from Arizona, California, Georgia, Indiana, New Jersey, New York, North Carolina, and Ohio, as well as international choruses from Austria, Canada, France, Hong Kong, Mexico, and “individual singers from around the globe.” The emotions created by such large musical forces, mirrored and magnified by the excitement of the packed hall of music-lovers, have to be experienced to be believed. Suffice it to say that anyone proclaiming the end of classical music needs to crawl out from under his rock and witness it.” 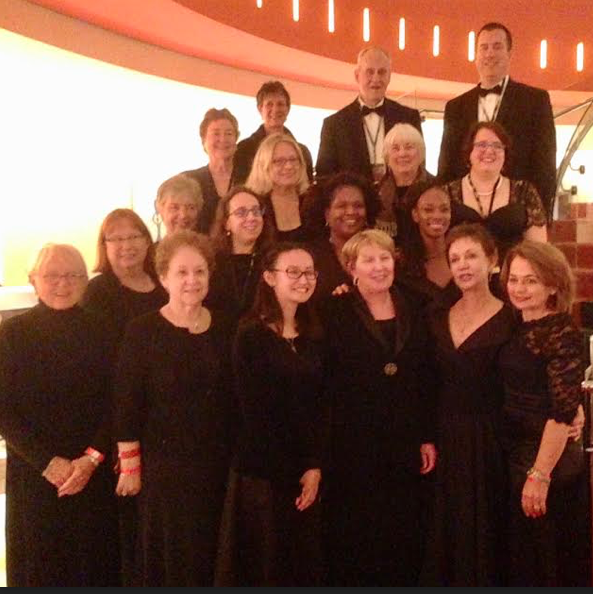 Eric went back to hotel, but Norm, Andrea and I walked to the subway and took it to Macy’s to view their Christmas windows. We had hoped to go to Madison Avenue to see the windows there, but I was too tired. 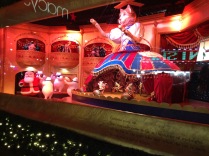 We taxied to Hotel Edison by 9:30 and had a short rest. Then Kathy and Chuck Johnson, friends from Minnesota, joined us in the lobby for a brief visit. They just happened to be in NYC at the same time. We were pleased to be able to connect with them. They walked back to their hotel. ……..Sleep.