1973-1976: I learned to needle turn applique and hand quilt while living in Hawaii. I wanted to make something truly Hawaiian. Still love echo quilting, but will use the machine on big projects in the future.

2002-2007: Started while living in Utah and finished after moving to MN. Lot of it was quilting while driving between the two states. It was my first attempt to piece, used a magazine pattern, and cut the pieces with a scissor while watching TV. Obviously, I needed some updating!

Made while living in Utah; after one episode with piecing and hand quilting, I wanted a faster approach so stenciling and paint were applied. Regular stencil paints on fabric. Not a quality hand.

2005: First full designed art quilt. The quilt shows the nine state we have lived in – counting our return to MN as the 9th state.

2006: Part of a monthly meeting series

Part of a monthly meeting project.

2006: Created from a kit for my daughter’s birthday.

2006: Introduction to quilting – frustrating, so I donated it to a church charity where it was quilted and sold. 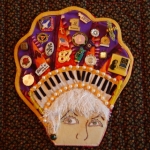 2007: Designing Innovative Visual Arts Sisterhood (DIVAS) was formed – an arts quilt group of 12. We each created a signature piece and mine remains as my logo.

2007: After a class in paper piecing, and a lot of assistance in choosing the colors, I created this tote to carry my large tools and accessories to workshops.

2008: Loved this panel of snowmen, so I just built on the theme with my own design.

2008: The winter was particularly harsh in Minnesota, so I designed a small Hawaiian pineapple quilt. It grew into a larger rendition. It was a return to my beloved Hawaiian echo quilting which I hope to incorporate into more quilts – but probably not hand quiiting.

2008: First attempt to create my own pictorial scene from photos. Made for my dad’s 90th birthday commemorating the barn on our family farm.

2008: Working from a photo. First attempt to fabricate faces.

2009: Learning to use Shiva Paint Stiks and use a stencil pattern created by Nancy Kazlauckas

2010: Created from Lyric Kinard’s lessons on “Bead It Like You Mean It!” and “Photos on Fabric” classes.

2011: Learning to quilt from my own sketches and use the fusing method taught by Laura Wasilowski.